Order from Amazon (or your local Indie bookseller!)
Order from University of Alabama Press

Located somewhere in the rust belt in the early twenty-first century, residents of The Town of Whispering Dolls dream of a fabled and illusory past even as new technologies reshape their world into something new and deeply strange: Dolls walk down the streets, cradling their empty heads and letting the wind turn them into flutes. A politician heads to Washington DC and leaves a toxic underground plume in his wake. A woman eats car parts instead of confronting the children who've forgotten her. A young woman falls in love with the robot who took her job at the candy factory. The manufacturing past of the Midwest haunts these stories, as does the opioid epidemic and the technology of war. In The Town of Whispering Dolls, it's usually the grandmothers and the children who grieve. Feeling invisible, in the story "Here," a woman who's buried her children looks up at the sky where commercial and military jets fly overhead and tries to express her rage to the rich and powerful: "Keep flying above us in your planes. From one coast to the other, keep right on flying over us! We test your bombs and your beloved warriors. Here. Right here. Look down."

The Town of Whispering Dolls 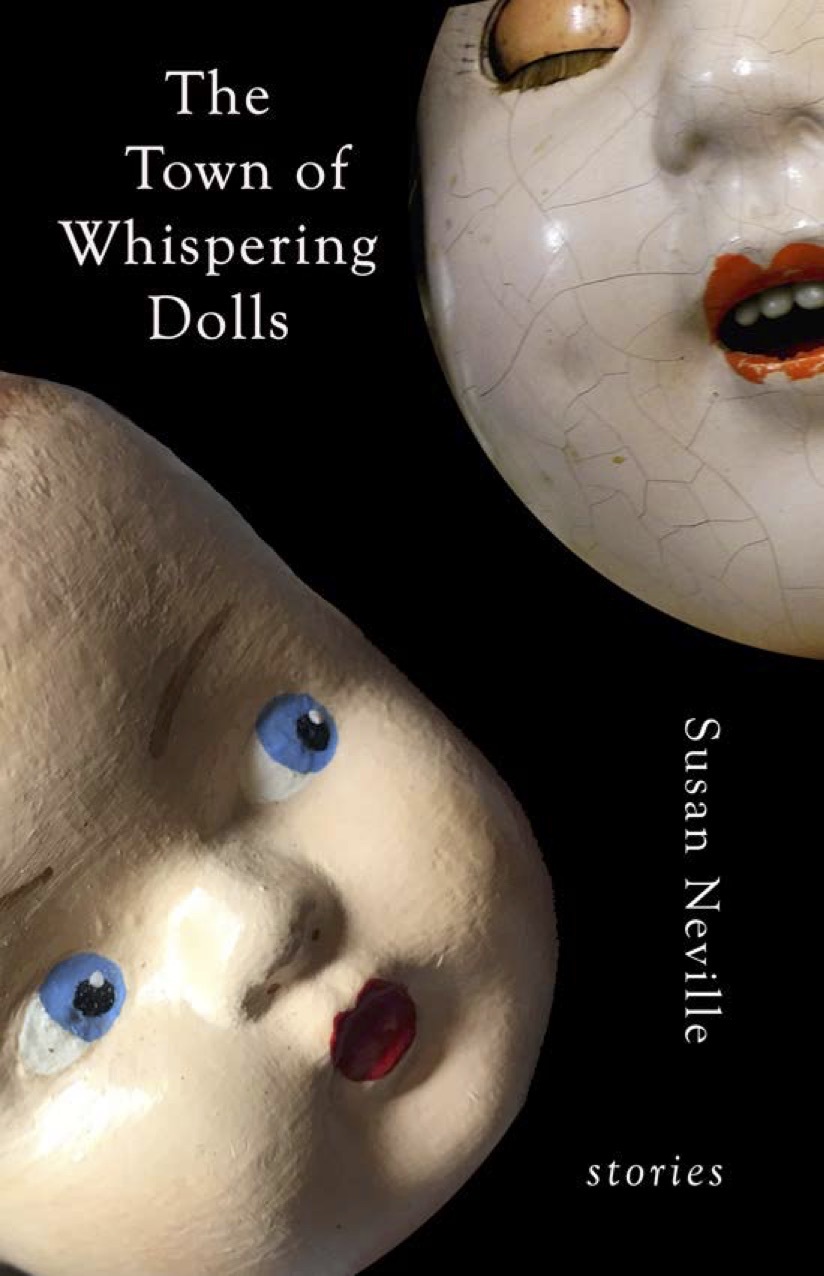 "What beauties these stories are.  Susan Neville has an imagination not only rich and strange but also very much a moral imagination.  How gentle and shocking is her view of what humans have done, and what a find this book is."—Joan Silber, author of Improvement

Neville (Fabrication, 2009, etc.) seduces a reader with language, but there's nothing romantic about her words. The book is haunted and haunting, not only by a group of roaming dolls, but by the consequences of American empire. "Grotto," the opening story, makes for a mysterious and disturbing kickoff: Narrated by "the mother of a girl who is now a doll," the story introduces a chorus of dolls that sing by removing their heads. "As you know, the heads are empty. And so the singing comes from the emptiness at the base of the head, like wind blowing over the neck of a bottle. I can't say where the breath comes from, but it always comes." The following stories illuminate the area's history, geography, and economy, providing context for the dolls and the people struggling to survive. With the mill shut down and farms displaced, the locals can sometimes earn a bit of money by dressing up in "head scarves and choir robes" to play captured civilians at the army base's fake Middle Eastern villages for training exercises. These circumstances are deranged, perhaps even more than "a plague of dolls" infiltrating a community already beset by poverty, drugs, and environmental degradation. Neville has a lack of cynicism while confronting these crises that makes the stories searing. The narrator of "The Plume" says matter-of-factly, "Why am I telling you this? Out of love, I suppose, for this little strip of human habitat,ion. Out of anger. Out of the wish to confess."--Kirkus Reviews

In Neville's bracing collection (after In the House of Blue Lights), residents of an unnamed Midwestern rust belt town develop unsettling relationships with dolls. In "Here," an older woman who's seen her town ravaged by factory automation and deaths from opioid addiction, describes the appearance of "a plague of dolls," humanlike and human-size figures who enter abandoned houses, filling the space of those who have left or died. In "Resurrection," one of the strongest stories, elementary school students assigned to take care of egg babies build homes for them in boxes with families peopled by paper dolls and toys from fast food restaurants. Their playacting becomes eerily realistic when the students begin to worry about their egg children dying; one student opens a hospital for injured eggs and finds herself overwhelmed with patients—eggs, dolls, and the students themselves.  --Publishers Weekly

"These stories are gems. Neville's prose feels sourced from poetry, with its deft metaphors and fleet movement between the real and surreal, leaving the reader in a kind of dream landscape, recognizable yet askew, replete with the chilly thrill of inhabiting a new world. This foreign yet familiar place is the so-called flyover country, our country's heartland, and at a time of decline, of abandonment, of aging, of death. The voices in these stories are eloquent and profound, personal and national, serving as a chorus, singing the complex song of loss and praise, the elegy."—Antonya Nelson, author of Funny Once: Stories and Bound: A Novel

Winner of the Catherine Doctorow Prize for Innovative Fiction from Fiction Collective 2. March, 2020.

The Town of Whispering Dolls

A collection of short fiction inspired by the 2015 opiod-fueled HIV epidemic in Austin, Indiana, as well as rapid economic and social change. Located somewhere in the rust belt in the early twenty-first century, residents in The Town of Whispering Dolls dream of a fabled and illusory past even as new technologies reshape their world into something new and unsettling.

Sailing the Inland Sea: On Writing, Literature, and Land
Calling on the image of the Midwest's vanished inland sea, this collection of essays ponders the writing process and the "landlocked imagination."
Iconography: A Writer's Meditation
Memoir and meditation on writing
Invention of Flight
Winner of the Flannery O'Connor Award for Short Fiction
FABRICATION: ESSAYS ON MAKING THINGS AND MAKING MEANING
We are a nation of consumers. In this meditation of manufacture, Susan Neville journeys to factories in the heart of the midwest, looking for the sources of things.
IN THE HOUSE OF BLUE LIGHTS
"Susan Neville's language shimmers like light coming through colored glass, and her subtle words uncovered the inarticulate longings that burn the hearts of the most ordinary citizens. Susan Neville is one of the finest short story writers in the country." Maura Stanton